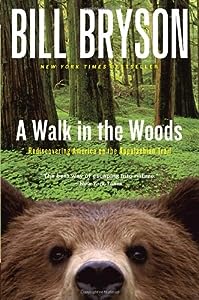 I made the mistake of watching the movie adaptation of this book. I’m not going to say it’s the worst movie I’ve ever seen, but it was pretty bad. I watched it with my aunt, and we both made it to the end before we spoke, at which point we both commented on how boring and anticlimactic we found the movie to be, having also both continued to watch it because we believed the other was interested and didn’t want to spoil it.

However, although Bryson and Katz’s grappling with the Appalachian Trail was nothing spectacular, I did find that I enjoyed Bryson’s writing style as well as the slew of information he put forth. At times pompous, at times humorous, this was the first of Bryson’s books I’ve read, and I would try reading another of his books. I truly appreciate that he was able to pack that much history and information into the story in such a conversational fashion, providing insight to a person like me who would not otherwise delve into such research on my own.

Hiking the Appalachian Trail does seem like an ambitious proposal. As someone who has proposed such a feet, I can’t yet tell you what my own thought process would be in such a situation. However, I do appreciate Bryson’s honest approach as well as admire that he still wrote a book despite giving up numerous times. Sometimes giving up is indeed what is best, and I believe the message here is that it’s okay to feel accomplished and still to give up on a goal that is out of reach, or even just if you don’t want to continue any longer. So much of the way we talk about things as a society is goal oriented with a feeling of accomplishment in the completion, and a feeling of failure in the abandonment. Bryson still experienced the Appalachian Trail, which is more than many people get the chance to do. He opens the door to conversation.

I don’t believe Bill Bryson has his own website, but he is the author of more than a dozen books as well as being published for having written a number of forwards. A Walk in the Woods has become one of his more famous books. He’s lived back and forth between the US and England all of his life.

One thought on “A Walk in the Woods ~ Bill Bryson”