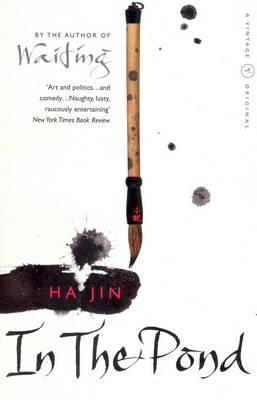 The Pond is the Commune, and Shao Bin is in the pond. This story about communism and fascism, is designed to shed light on the injustices and corruption present in China (as they would be anywhere). Shao Bin is a young man with a wife and young daughter, working at a fertilizer plant. This story seemed along the lines of Animal Farm, but from a Chinese perspective.

This novel is chalk full of imagery as metaphor. Bin often finds himself thinking things like, “You shouldn’t play the lute to a water buffalo, he said to himself. Without doubt Song was ignorant of the fine arts, unable to appreciate real work.” He seems to feel he has more artistic talent and appreciation than everyone around him.

Bin writes/draws political cartoons to shed light on the faults of his supervisors. However, he often finds that political corruption runs so deep among the higher ups in the commune, that his supervisors give rewards and take punishments seemingly on a whim. In fact, the response from his superiors with regards to his attempts to uncover their injustices was,”An ant can’t shake a tree. If a mantis tries to stop a tractor, it will only get itself crushed. Please have second thoughts before you try again.”

And, of course, this is the story of rage. This is the story of how angry one man can become when it feels like he is not treated equal to his peers when the basis for all of their existence and persistence seems to be based on achieving equality through communism. Ha Jin expresses his anger very explicitly at times, saying things like, “I screw your ancestors! I screw them pair by pair!” He waffles back and forth between threats, subversive publicized messages, and sucking up to the officials, yet it seems nothing works, so he often gets angry.

Ha Jin is a novelist and poet, and a professor of English at Boston University. Some of his more famous works include Waiting, Ocean Words, and Under the Red Flag.

One thought on “In the Pond ~ Ha Jin”