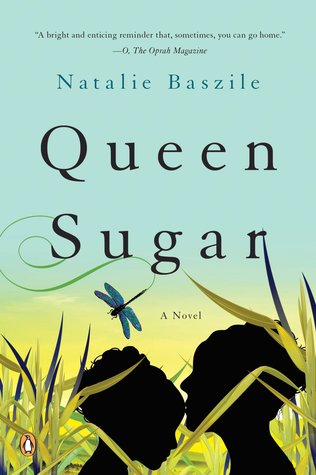 I loved this story. Baszile keeps the pace quick and her writing witty. Queen Sugar is the story of Charley and her family. The story starts when she receives an inheritance of a cane farm from her father and shows a contemporary picture of cane farming and a Southern lifestyle. Baszile discusses the racial tension felt by Charley and her family in the South; as a black woman from California, Charley is somewhat unused to the peculiar subtle yet in-your-face form of racist comments said by people in rural Lousiana. However, she finds more good folk than bad, and with a little open-mindedness, she works her way into people’s lives to help them change their own minds.

This is definitely a feel good contemporary story, but it’s not without its tragedies. Charley and her family talk a lot about the injustice particularly with dealings with trigger-happy police officers. Over all, this story was about family and relationships. Charley connects with her family down in Louisiana after living in California and forms bonds with some of the most honest and genuine people. Baszile’s writing may have been a bit flowery and descriptive, but I found it had a good rhythm that made reading this story a breeze.

Baszile did a good job of rounding out the characters. No character was one-sided, although I did feel like Ralph Angel fell into a trope a bit too hard. Her brother, Ralph Angel, has his own difficulties that seem to permeate all of their lives. His pattern of drug use is often how it goes, unfortunately. Ralph Angel took over many chapters, and I didn’t care to read his side of the story as much. I don’t have much patience for angry people, unfortunately. It seems many of the characters have a very angry side to them that was revealed throughout the book. I’m not sure how many books actually reveal the angry side to so many characters like Baszile does, but it’s effective at rounding out most of her characters in a way that I almost feel as though I know them.

I wish Baszile had focused more on Charley’s relationship with her daughter, Micah. Micah seemed at the beginning to be one of the focal points, but she didn’t get much air time throughout the story, other than Charley regretting not spending more time with her daughter or making sure her daughter had friends. Occasionally suitors would comment on how Charley seemed like a good mother, which Charley would be so excited to receive as a compliment, yet all the other times Micah was mentioned, Charley was regretting their interactions. It didn’t feel like the mother/daughter story-line was ever fulfilled in a meaningful way.

The ending was very abrupt, and I found the solution to be rather simple, although unexpected. Baszile shifts the frame of thinking about some of the characters right at the end, which was an interesting twist after the main events had happened so gradually and predictably. She created heroes where I didn’t expect them to be, and let bad things happen to people when I didn’t expect them to happen.

If you don’t like contemporary or don’t want to watch the main character fall in love as a subplot to a book about a strong woman taking on a big project with her own tragic backstory, however, do not read this book. This seems to be a very niche genre, and I thought it was a quick read that was easy to get into. I’ve had this book on my shelf for a while, probably because it is a contemporary and this niche genre tends not to captivate me quite as much, but I couldn’t put it down.