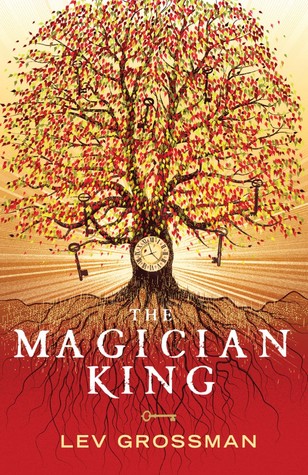 Much like the first one, I was not immediately hooked in the story. The Magician King does not leave off right where The Magicians left off, but rather where the next scene of the plot begins, which happens to be three years down the road. I found the jump slightly disorienting, but after the first 30-40 pages, I was right back in it again. I find Grossman’s writing incredibly easy to follow, and he keeps a steady pace that allows me to breeze right through without noticing the passing of time in my own world.

Quentin seems different than he did in the first book, and I’m not sure if it’s Grossman’s writing not doing him the same justice, or if he’s had a change of character/personality/emotion(?) sometime in the three years gap between the books. He’s more self aware, and definitely more relaxed. His emotions are not as strong, and he doesn’t seem as depressed or snarky, just ready for the next adventure. Once he realizes he’s been waiting for the adventure to come to him, he decides to take matters into his own hands and find the adventure.

Julia’s story has just gotten weirder, and I’m beginning to question Grossman’s ability to write female characters. He seems to stumble when it comes to the female leads, and latches onto one major personality trait and amplifies that until it consumes every scene that contains them. For Alice, it was her intelligence, for Janet it’s her sexuality, and for Julia, it seems to be her depression. However, about halfway through the book, readers learn more about her backstory a chapter at a time, until finally the truth of how she came to be catches up with what we know of her now, and her story is more shocking and violent than I would have expected (trigger warning: rape).

Quentin, who was cast as inherently snarky and never satisfied, develops new dimensions to his personality through the quest. Eliot, too, has been through tremendous growth and character development, probably the most out of the group despite his lack of scenes. Even Josh and Penny are multi-faceted, as we discover their backstories and find out where they are now, three years later. Unfortunately, despite Julia’s new identity and the uncovering of her tragic past, I still feel that Grossman’s story lacks strong female characters. One alone is not enough.

This journey was more cohesive than the snapshots of Brakebills life, as Quentin was clearly on a journey and the story followed Quentin’s Quest clearly. No longer are the chapters titled, as they were in the first book, and Grossman only skips through time to follow Julia’s backstory, rather than just to speed up or slow down the plot. As there are fewer characters and not as many events occurring at the same time, this change in writing style made logistical sense, as well as lending itself towards the Narnia theme this second book relied heavily on. If the story is a Hogwarts/Narnia mashup, and the first book was clearly Hogwarts themed while the second book followed Narnia, what will the third and final installment bring? I’m curious to see if and how Grossman’s writing will adjust for the finale.