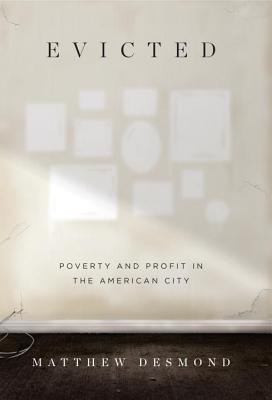 This socially relevant masterpiece tells the tale of eviction in America, giving voice to inner city landlords and tenants alike. A true gem, this book was difficult to read, but I found it easy to get into and learned so much while I was there. An ethnographic study, for those of you who are not familiar, means the researcher makes an effort to delve into the community they are researching, getting to know the culture and the people on an individual basis, and reporting based on those individual interactions. Many ethnographic researchers draw connections back to statistical reports to supplement their findings and connect their research to the general population.

Desmond does a wonderful job of presenting individual’s stories, going behind the scenes to incorporate dialogue and quotes on a variety of topics. Six tenants’ and two landlords’ stories are followed throughout the before, during, and aftermath of eviction by the author who lived among them and supported them where he could. Desmond connects readers to those in danger of eviction by telling their story, showing us how each person is living. Faced with the story of how each person eats, has fun, works, and expresses sadness and anger, how could we possibly continue to ignore the fact that people who are evicted are people?

Rather than counting off people in poverty as just poor, we are required to see them as people first. Desmond’s clear ‘people-first’ argument will tug on your heart strings, no matter what you believe. Those who were a part of the study include drug addicts, church goers, working mothers, single parents, young couples, elderly disabled folks, landlords who just want to help, and everyone in between. One of the tenants, Scott, even goes from making 80k a year as a nurse to falling on bad luck with drugs and later into the cycle of eviction and chronic homelessness-. This book is designed to leave you feeling that you never know who could end up in this vicious cycle, and to remind you that those who find themselves evicted once have a hard time maintaining long-term housing.