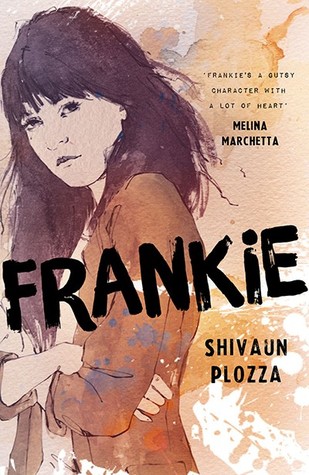 Frankie is too angsty for me. Both her character and her story have little plot point other than her anger. I appreciate that as a focal point for teens and therefore for teen literature, but I’m also so tired of that routine of labeling and describing teens as angsty, particularly teens with trauma in their background. Sure, anger is often masked as a primary emotion, but there is so much more there for kids than just fear and anger, so this book didn’t do much for me.

The main plot is that Frankie, a long ago orphaned child who doesn’t know where either her mother or father is, finds her long lost half brother. She’s been suspended from school for punching another student, and she’s supposed to grovel her way back in. Meanwhile, she meets her long lost half brother, who she assumes was left by their mother a long time ago as well. Tension rises for her when she finds out their mother kept him until he was thirteen.

Frankie cannot keep it together. Usually I can empathize with young heroines who have a hard time saying the right thing, staying in school for behavioral issues, and conflicts with their parents or guardians. However, Frankie is just such a negative Nancy about everything, I have such a hard time relating to her. I can see how some people might find a connection to her anger, and she clearly has attachment disorder and probably a slew of other things from neglect, abandonment, and her youth in general. However, I didn’t find I liked any of the characters, and I liked Frankie the least, so nonetheless I found it difficult to get into.

I can’t even truly appreciate the ending because Plozza does nothing to wrap up all the loose ties! A paragraph per person is not enough for the conclusion of a novel, at least in my eyes. Am I missing something about this book that everyone else found enjoyable?

I received a copy of this book in exchange for an honest review via NetGalley.com.