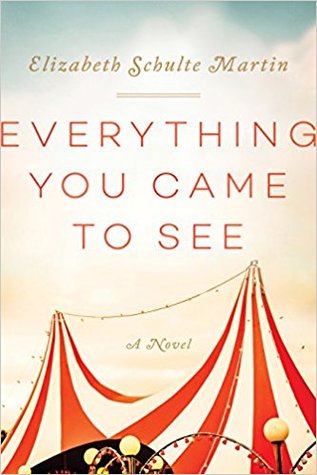 This book takes multiple perspectives to tell a story: that of the main character, Henry, his boss, Caleb, and Caleb’s wife Adrienne. The story unfolds predominantly through Henry’s eyes, as told by him through his scripts for his acts, and in third person narration that gives readers insight into his thoughts and feelings.

Henry begins working at a circus as a clown, a practice we find he’s studied for years. Henry’s life is somewhat mysterious, both to readers and to his coworkers and even the show’s manager. Unfortunately, the show has been on the brink of bankruptcy for years, and Caleb knows he has one last shot to make it or break it.

This book really has a lot going on, almost too much in my opinion. It’s quite a downer, as much of the plot stems from sickness, trauma, and mental illness. However, Martin does a lovely job of tying each storyline together, building the tension over time. It was definitely enough to keep me interested and reading. I never developed a strong sense of attachment to any of the characters, although Martin has a wide assortment of characters, as one would if one were writing about a circus.

The piecemeal way in which the character’s narratives were strung together and the story jumped from one scene to the next seemed to work for the story, as I felt that Martin was trying to emulate the abrupt and unexpected nature of life, especially in such an unpredictable industry.

I definitely found myself skimming often over lengthy paragraphs, filled with details that I didn’t quite find interesting. The details didn’t always seem necessary for the plot, and they didn’t fill my brain with extraordinary images. I often sought the dialogue when I felt the pace was running a little slow, and I was able to keep a steady pace that way. I didn’t get a lot of imagery of the scenery; Martin focused on giving readers a good understanding of the characters, both their appearance and their personality. I’m hoping some editing can be done to solve the descriptions, as the characters had a lot of potential.

Towards the end, Henry seems to all of a sudden have an epiphany and start using some coping skills to deal with himself, and that’s never quite addressed. For all the times he fails to use an healthy coping skills or even think about handling things a different way, I was surprised that out of nowhere he would just start using them.

I received a copy of this book via Edelweiss+ in exchange for an honest review.