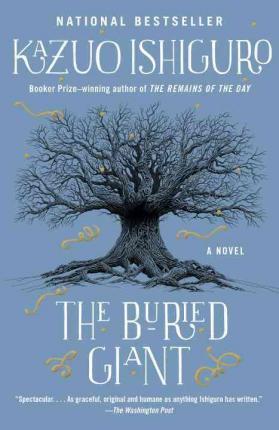 I have to say, I’m more a fan of Never Let me Go than I am of The Buried Giant. Personally, The Buried Giant is not quite my genre. This historical fiction/fantasy is a tale set in the UK with Saxons and Britons, during Sir Gawain’s era and shortly after the fall of King Arthur. As such, this tale contains ogres, peseants, magic islands, and everything else one might expect in such a tale. The characters are fleshed out, but not terribly interesting to me. However, it is an epic tale of romance that extends from youth into these characters’ old age. And there are some fight scenes.

Axl and Beatrice are an elderly British couple, journeying to find their son in hopes of lifting a mist to regain their memories. This is the entire plot of this book, and in my opinion, incredibly slow paced. However, the transitions from scene to scene were very beautiful, and the couple’s strange devotion to each other kept me reading. Clearly there seems to be a lot of symbolism that I’m missing, and instead it just felt oddly slow.