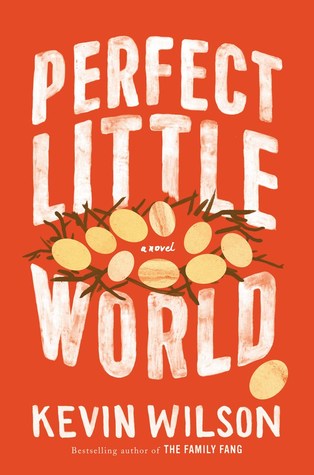 This book has been on my shelf since long before it was published. I’m not quite sure why it’s taken me this long to pick it up, but once I did, it was hard to put down.

Almost cult-like in its premise, Wilson’s story is one of a girl named Izzy who finds herself with one option that seems better than all the others once she learns she’s pregnant. With no family and lacking financial means, Izzy decides to join The Infinite Family Project. Along with nine other families, Izzy is thrown into an isolated world of research, where she and nine couples raise their ten babies together. The experiment is to create a large and nurturing family to help increase the children’s positive childhood experiences, giving them a jump start on life, so to speak.

There are very weird relationships happening throughout this book. Wilson’s writing style is wonderful for this bizarre story. He keeps the reader moving through the book at a quick clip, and for a good two thirds of the story, the pace felt very well timed. Each scene felt important, but I never quite got bored with the depth of their relationships. However, the ending did feel a bit harried, more to come on that.

This story is as much about Dr. Grind, a product of his own experimental upbringing by his scientist parents, as it is about Izzy. Dr. Grind is a fascinating character, and Wilson spends a lot of time focusing on Grind’s obsessive control over his emotions. I found it fascinating to read about his adversity to change, as well as his feelings of anxiety over his emotions. In the end, however, I didn’t feel his storyline was resolved nearly enough. I have many questions about how he was coping through all the abrupt endings in his life, and I’m not sure he would’ve handled them very well had the story continued.

The ending felt unsatisfactory, as though I was eating a semi decent dark chocolate all night and suddenly was handed a milk chocolate bar. It’s not the worst, but it is rather disappointing. The ending feels too abrupt and cliche, the kind where I roll my eyes and think about how I saw it coming long ago. The journey near the end was not particularly fulfilling, and we are left with some happy little daydream like scenes. None of the dramatic parts of the book are quite wrapped up, rather just moved away from.

In the end, I don’t think I will be reading more from Kevin Wilson, although I did enjoy this story. However, it did not stand out as much as I anticipated it would based on it’s premise.