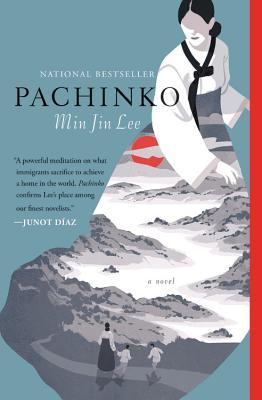 Pachinko is a phenomenal read, chronicling a Korean family’s history as they move from Korea to Japan and beyond. Beginning with Yangjin and Hoonie, Lee follows the family from early 1900s through the late 1900s, showing the successes and failures of the family at large.

From the opening line, this book is striking. “History has failed us, but no matter.”

With this huge family tree, you’re sure to find someone to connect with.  My personal favorite characters were Mozasu, Khyunghee, Haruki, and Yumi. Each of these characters maintained a light-hearted nature despite their struggles, which I believe is why I enjoyed them most. Their kind-hearted approach to their family and to those they worked with was incredibly enjoyable as a reader.

**From here on, I’m going to do a light analysis that will not have any direct spoilers, but will hint at plot points throughout the book. You’ve been warned!**

Even Hansu, our main villain, was rather nuanced. I enjoyed thinking about what he would do next, and was sad that there was not much of the book written from his perspective. He was very self-centered, but at the same time he was able to use that to help the family knit themselves back together when they were separated. So while many of his motives seemed self-serving, he was not intentionally trying to harm the family in any way that I could tell.

I was stunned at how many different experiences were had by the same family in just the course of the century. One of them went to jail, many of them became pregnant at inconvenient times, there was talk of mental illness and disability, several of them questioned or revealed their sexual identity over time, some of them were scholars, some were tradespeople. Many of them persevered despite hardship, others did not. This overwhelmingly stunning cast of characters really left me feeling like I understood better what it meant to be someone living in Japan during this time period, particularly for Korean immigrants/refugees living in Japan.

I read Pachinko as part of an Instagram book club called #bigbookbuddyread, hosted by two amazing women. I loved being a part of the discussions there, as all of us continued to guess at what was to come for Sunja and her family. I’m glad that some of my happy predictions came true, although I am shocked at how many things Lee uncovered that I never saw coming. There is a lot of hardship in this book, and I often felt like the storyline was not easy to hear, although this book was quite easy for me to read. I enjoyed the pacing, and the speed with which Lee carried on through the good times and the bad.

Beauty is a recurring theme throughout this book, and I have to say I’m not quite sure why. Perhaps it has to do with beauty being a form of currency for women who did not work or have access to money in the same way that men did. Lee took some time to talk about women who sold their bodies for money, and the effects that had on these women. However, blunt descriptions of Sunja that continued throughout the book seemed to be repetitive, and I’m not quite sure why they were necessary. If you have read this book and have any thoughts, please let me know.

The role that pachinko played throughout the book was fascinating as well. Pachinko is a pinball-like game that was often run by Koreans in Japan. There were several lines scattered throughout the latter half of the book especially that referenced that Sunja’s family felt like they were bouncing from one thing to the next, never knowing where they would end up, and always being drawn back to a way of life that was never quite what they wanted, never quite succeeding in the end.

Pachinko is an incredible read and I highly recommend it. It would make a good book for book club discussions, and I think it could very well end up on high school reading lists and be quite worthwhile, although it is a rather hefty book, coming in at almost 500 pages.