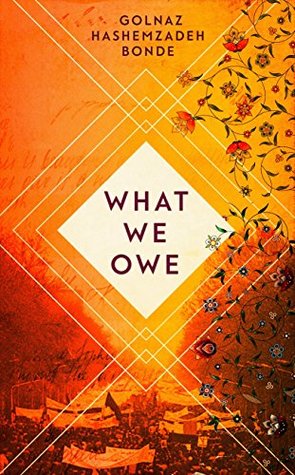 I am so in love with the writing style. Bonde captured my heart so quickly, and in such heart-wrenching ways. This story is set in Sweden, with two Iranian immigrants, Nahid and her daughter Aram. Nahid fills readers in on her vibrant and violent past, the reasons she ended up in Sweden.

“I know I felt proud on that day, at that moment. Proud and happy. I should have been satisfied with what I had. Not grasped for more. But I did anyway.”

Nahid is our main character, a woman who is older, but not yet old enough to die. She finds out she has cancer and spends most of her time trying to come up with a reason why. She analyzes her past, sending readers into a deep dive of her memories, and gives glimpses of her anxieties moving forward and how those anxieties effect her interpersonal relationships. She goes through everything searching for an answer, sifting through her relationship with her parents, siblings (particularly her younger sister Noora, and mistakes she feels she made with her), Masood (her husband), Aram (her daughter), her relationship with herself.

“His face shone with joy and admiration, and the longer he looked at me the more my insecurity fell away. It didn’t matter what clothes I wore or what doubts I had, I felt that he saw who I was. That he saw what I wanted. That he’d help me get it. I felt that he wanted my freedom and strength, might even want it more than I did.”

Bonde’s writing is excellently translated so that the rhythms and cadence of her language shines through. She has an eloquent way of expressing emotions that trigger my own emotional response. The way in which she wrote Nahid’s story, so compassionately, resonated with me, and I felt what a terrible feeling it must be to have cancer. However, it was not all bad for Nahid, and that’s what made her such a life-like character. She is able to find the good amidst the bad, able to appreciate the sway of branches in the wind.

“Soon we were all on our feet, someone had put on a vinyl record, and we sang and danced with lettuce and meat cleavers in our hands. Witches and whores gave way to Hayedeh, a pop icon.”

Trigger warning for domestic violence. There aren’t many healthy relationships in this story, and Nahid herself expresses that when you see the cycle of violence over and over, it comes to feel that it’s meant to be. That violence is always expected in order for it to feel right. This is something I’ve explored during my time as a social worker, the reason these things are called cycles because those participating feel vulnerable finding new ways to communicate outside of violence.

“I think I started to feel like I was a person in and of myself. That I existed beyond my relationship to others. It was a completely new idea, and it lasted about as long as a fart.”

Bonde’s imagery is powerful, and Persian colloquialisms shine through in translation. I love how the translator was able to honor the cadence of Bonde’s distinctive writing style. I would definitely recommend this book, as I felt more connected to Nahid than I ever expected to feel, especially in such a short amount of time.

I received a copy of What We Owe from Edelweiss in exchange for an honest review.